Book Gifting Missions around the Globe 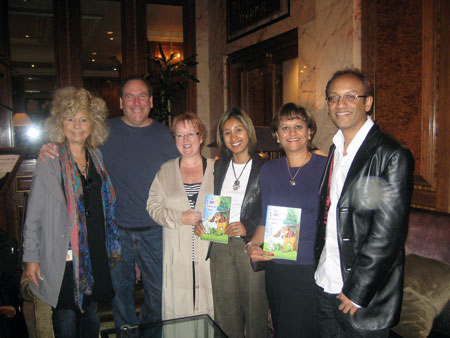 From left to right: Dr. Marilyn Powers, Steve Viglione, Majella McElwee, Lina Patel, Kay Patel and Deven Patel at The Sheraton Hotel, Heathrow Airport, London, England. The team met together for the first time on our way to and from the 2008 Kenya Book Gifting Mission. Majella and the Patel’s took Steve and Marilyn to The Vintage Restaurant on Station Road near Tesco's and Harrow on the Hill to celebrate their new partnership.

On January 13th, 2009, The I AM Foundation, UK, was birthed by the above team at the initiative of Lina Patel, Majella McElwee and Kay Patel of London, England. We are very grateful to our friends who believed in The I AM! Affirmation Book and The I AM Foundation so much they wanted to bring it to London and The United Kingdom. We are a registered corporation and soon to be a registered charity as well.

Lina Patel first found about The I AM Foundation from Louise Hay who featured us in The Hay Foundation’s 2008 Summer Newsletter. Lina contacted us shortly after and we put the first inspiring meeting together via email. Lina has a young adopted son and her vision is to gift The I AM! Affirmation Book to adopted children and other children in need throughout The United Kingdom.  Lina, Kay and Majella want all children in the U.K. to know how “Priceless” they are.

We plan to gift many kids in the U.K. with our book. If you would like to help Lina and her team to sponsor children in the U.K. to receive The I AM! Affirmation Book, please contact Lina .

We will be posting more information about our U.K. office as things unfold. Check back for more details soon!